Today you will spend time researching the life and times of William Shakespeare.  You will be provided with the appropriate sources and questions that must be answered using these sources.  .

Keep in mind as you read how different Shakespeare's time was from our own.

William Shakespeare is one of the most famous playwrights in British Literature.  His tragedies and comedies have transcended time and are read by people all over the world.  This includes high school students who analyze and dissect the plays in classrooms across America.

However, Shakespeare lived in a time that is quite different from ours.  It is important to understand the Renaissance and the role it played in the development of Shakespeare's plays. 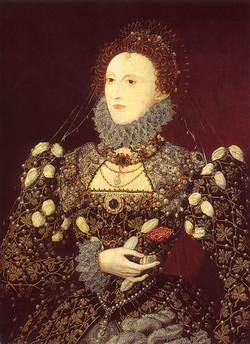 Instructions: Read each section of this webpage carefully and follow the links to the websites to find out more information.

There are several tasks to complete throughout your quest. All answers should be written down on a piece of paper.

Task One: Who is William Shakespeare?
Start with MLA heading on your paper, and title it Shakespeare WebQuest.

Using Google Images, type in William Shakespeare’s name. What does he look like? Sketch his face quickly onto your paper.

Copy the following onto your paper using this link. Skim and scan the webpage for the correct information. Answer in complete sentence.
Task Two: The Globe Theatre
The Globe Theatre was a 20-sided open-air playhouse designed in 1599, where Shakespeare worked and where many of his greatest plays were first performed.
The first Globe was destroyed by fire in 1613, but by 1614 it had been rebuilt and reopened. After closing again in 1642, it was soon demolished.

Take a tour of the Globe Theatre.
Globe Theater Facts and Things
List 5 important details about the theatre in complete sentences.

William Shakespeare was a playwright (somebody who wrote plays for a job); he wrote many famous plays, which are still performed today.

Follow this link to find three plays Shakespeare wrote (there are MANY). Write the names of the plays you selected on your paper. Be sure to include the play titles in a complete sentence, so that you know what was being asked of you.

What 3 categories are his plays split into? Fill this out on your paper in a complete sentence.


Shakespeare used all sorts of words that you wouldn’t hear today, click on the link below and look at the ‘weird words’ section (Under “Words, Words, Words).  On your paper, write the label “Weird Words,” and then copy two examples of weird words from the website and what they mean.

Shakespeare used lots of insults in his plays.  Have a quick go on this insult generator to see what insults you can come up with. On your paper, write the label “Insult,” and then copy two  of Shakespeare’s insults.

Task Five: On Your Own

Now, use your knowledge of reliable sources (NOT Wikipedia, and usually not sites that end in .com or .net) to find the answers to the following questions.  Write each response as a complete sentence so that you do not have to copy the questions, and be sure to give proper credit to your sources!
Credit should be given in the form of a parenthetical citation at the end of each answer.  Your citation should include the author of the information.  If there is no author, your citation should consist of the title of the page from which you took your information.